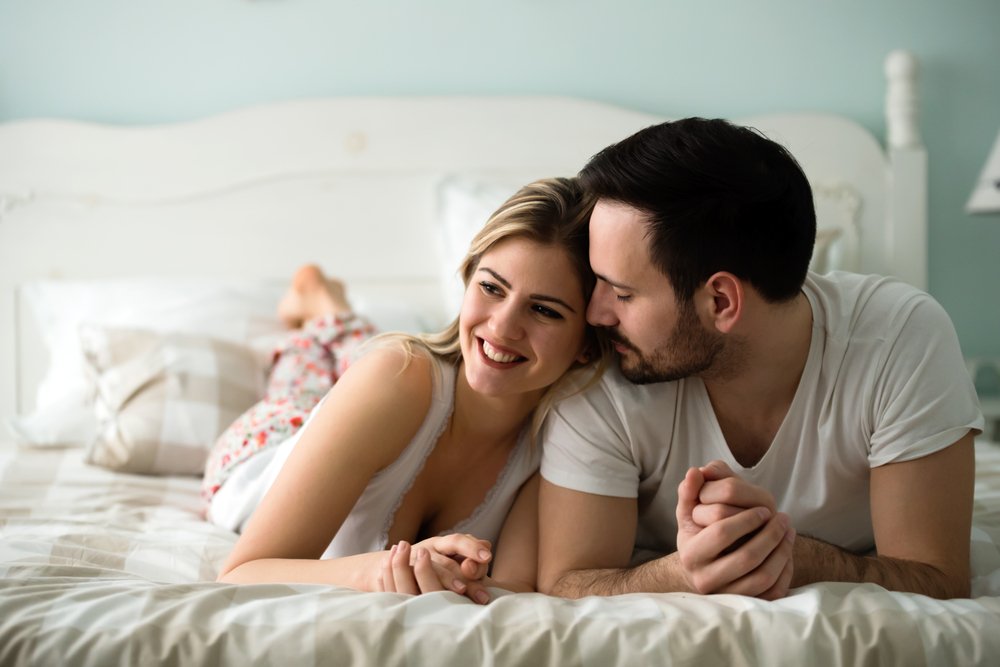 Being married is hard. Aside from the skyrocketing divorce rates, seemingly inevitable financial struggles, and life’s unpredictable timeline of diagnosis, job loss, or trauma, intentionally agreeing to commit to one person forever is kind of a completely insane idea.

Of course, there is beauty in marriage—the honeymoon phase, the excitement of pregnancy and babies, the vacations, or the sweet little unmentionables like notes on the shower-steamed mirror before work. However, in my season of marriage, one that could currently be titled, “Parenting: That’s Literally All I Have Energy To Do”, marriage just seems hard. I imagine it might feel like that during other seasons in life as well.

In many of those seasons, the steamy notes take a backseat to loss or heartache, soccer games, and sickness.

After a friend mentioned this how often she and her husband have sex (at least four times a week), I was feeling a little “less than”—a state of being I can get lost in if I’m not careful. At that time, my husband and I would’ve felt victorious if we were together four times a month.

I mean where did they find the time!? They even have one more kid than we do!

So naturally, I pitched the idea to my husband. “Do you think we could do that? Have sex that often?” I questioned laughably because I know us.

And that’s why I married him, folks. He gets me.

That sealed it. We’d have sex everyday for a month. Thirty days. No exceptions.

Spoiler alert: we didn’t make it the full 30.

I don’t admit defeat often, but in this case, I learned some powerful lessons about love, motherhood, self-care, and strength that I’d likely never have uncovered without this playful challenge.

My husband and I, married nine years and together more than 13, have two kids. The oldest has several behavioral diagnosis, the youngest is 2-going-on-16, and that, my friends, is a recipe for a sexless existence. We also live tiny, so intimacy requires expert-level stealth and a certain level of preparedness beforehand.

For those reasons, the first few nights of our challenge felt forced.

To the mama who feels torn between desperately wanting to be intimate with her husband and her otherwise survivalist need to sleep because kids, I see you. Girl, I had to audibly coach myself to push through the wall of Tired Town and try my darndest to get in the mood.

Powering through that first week meant putting my husband’s needs and the commitment we’d made ahead of my desire to just give in to Netflix and sleep.

Toward the end of the first week, I began to get in a groove where it became exciting to look forward to see my husband coming home from work and have the anticipation of actually connecting once the kids were in bed. It wasn’t only about the act of sex. It was so much more as we made that time intentional. It became about intimacy in talking, asking questions, and reconnecting.

During the second week, I was shocked to find out just how difficult intimacy could really be when you’re actually trying. I mean, I have been with this man since I was 23. I barely remember existing in a life before he came into it. But when you’re forced to expose yourself, completely at your most vulnerable, the water can get murky.

Do I tell him what feels good? Do I look at him or keep my eyes closed? Should I say something?

This intentional focus on each other began conversations about topics we’d ignored. About my deep need to connect first in order to enjoy intimacy. Or his need to feel like he is pleasing me because that is where a big part of his enjoyment and fulfillment in our connection lies.

Week three was an absolute disaster. I won’t lie. Aunt Flo came early and, truthfully, I wasn’t mad about it. I mean, we are exceptionally fertile so that was a gift. A few days off and the knowledge we wouldn’t become parents of a third. Praise the Lord and hallelujah!

(Also, chill out, Karen. To each his own and I refuse to have sex while on my period. If that’s for you, get after it, girl! But ewwwww. Sorry.)

It was only in week four that I allowed myself to become empowered by the vulnerability in married intimacy. No longer would I stay enslaved to the fear or insecurity I had built up in my own mind.

I wouldn’t remain silent for my wants or needs. I wouldn’t hush my feelings, but instead listen to them, share them openly, and intentionally push through them alongside my husband instead of believing the lie that I was somehow saving him by staying quiet.

It never was my husband who put those feelings of fear or insecurity in me. Those had been planted deep inside through years of exposure to a world where expectations of beauty are run by the airbrush of mainstream media and the availability of pornography depicting sexual scenes never to be realistically recreated in actual love-making.

Do you know what happened? It opened a stream of conversation that needed to happen. It reminded me of all the reasons I loved my husband in the first place and added several more to that list. It proved that true, loving intimacy also provides safety, security, and a level of trust I’ve never known in any other relationship.

Giving ourselves the right to place a priority on intimacy paired with the grace to take a day off or choose the need for sleep was truly the best gift we’ve ever given each other in nine years of marriage. We bonded all over again. We learned new things. We allowed ourselves to be completely vulnerable. We started to look forward to each other again so prioritizing became easier.

And friends, it is making us more than better lovers, but better friends, better partners, and better parents. Show your kids how much you love each other. There is incredible freedom in that for you and security in your commitment to each other for your children.

Your open affection might seem gross to them at first. Laugh it off. It will show them that married intimacy is beautiful, not shameful. And they can rest in the confidence of their parents’ love as much as you can rest in each other.

Want to connect with other Extreme Parents in a judgement-free zone filled with encouragement? Consider becoming a Facebook Supporter!